What Does the Ravi Zacharias Scandal Teach Us As Disciples?

The best we can hope for is that our integrity is exemplified in us having a transparent relationship with our sin. 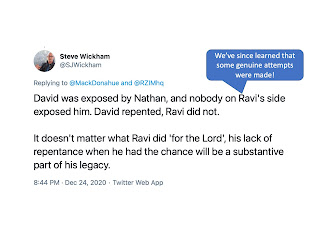 We all know, I hope, that Ravi Zacharias is not a King David in the ways he responded to the exposure of his sin. David was exposed and then repented. We have Psalm 51 to show for it. And we know David was vindicated for his true remorse because we also have Psalm 32 to show for it.

Ravi stands condemned by human standards when we consider the incalculable wreckage strewn through the lives of his victims. The eternal assessment we leave with God. But, besides all the victim-blaming and covering for Ravi over the past several years, there is at least one global lesson for us all as we reflect on his life.

Ravi obviously felt he deserved what he took from the many women he used.

This is just one of the mirages of idolatrous thinking he sowed deeply into. It’s just one example of the lust of the eye, the pride of his life (1 John 2:16). There are a whole series of errors that must have led him to the point of dissociating from moral treason.

Pride is a seeing problem. When pride is an issue, we can only see what is false and self-elevating and ultimately self-deceiving, and we cannot see what is true; what is good for us and others. Pride is moral blindness. Pride literally destroys life, but it’s a slow burn, so, like the frog that boils slowly in a pot that’s gradually warmed to a boiling point, we don’t see it killing us and others until it’s way too late.

But before I conclude on pride’s opportunity for us all, let me shed some good news abroad for the vulnerable.

Good News for the Vulnerable

There are so many lessons we can learn from David’s life in terms of what went so catastrophically wrong with Ravi’s life.

Ravi clung to every bit of manipulative control he could to squash any hope of truth having its day while he lived. And he dragged his victims through immeasurable suffering in doing it.

For David, he was instantly broken for his sin. We well imagine that when we read the bitterly sorrowful opening verses of Psalm 51.

Not from a Psalm 51 viewpoint — feeling shattered for having sinned against theLord— could David see the Psalm 32 reality of vindication for repentance. But God’s forgiveness was David’s felt reality, even though there were still consequences for the rape of Bathsheba and the murder of her husband.

That vindication, working in tandem with the outworking of consequences for his sin, could’ve been Ravi’s reality too.

The key message here for any leader caught in sin is, be exposed, because even the most embarrassing and shameful truths when they’re exposed set us free.

We need to acknowledge the forces that would have kept Ravi lying. Fear! Control!

The saving grace we all have available to us is being at short account with God — who sees all! (Read Psalm 139) It makes sense then to pray the prayer of Psalm 139:23-24 every single day, and many moments throughout. Being brave enough to be brutally honest, hang the cost, is the only Christian way.

There are so many lessons we can learn from David’s life in terms of what went so catastrophically wrong with Ravi’s life.

But only if we’re open to imagining that Ravi was human, a sinner, like the rest of us.

The moment we place Ravi in a box ‘over there’, as evil personified, we lose grasp over a lesson that will only serve to protect us.

If we truly care for victims, we need to be committed to doing what Ravi did not. That’s the lesson in this for us all, folks. No more victims! None on our watch!

The moment we cast Ravi into the wilderness as a person who acted like we never would, paradoxically we stand apart from learning anything that would prevent the same thing occurring to us — and I know our lapses won’t necessarily be sexual sin, but that doesn’t mean it won’t come out in some other sinful form.

Pride considers we’d never do anything as gross as Ravi. But there are other gross things that may also entrap us.

The paradox is, it’s only when we admit we’ve got the capacity for evil that we’ve protected through humility from the pride of ‘that will never happen to me!’

This pride of ‘it’ll never happen to me!’ is the initiator of the slippery slope.

We all need to be aware that we all live some form of double life— the Christian life promises integrity, but who if any of us matches up to that standard? That’s the point. Christ is our perfection, but we need to be good enough not to sin profanely against others and God.

The best we can hope for is that our integrity is exemplified in us having a transparent relationship with our sin.

Our hope rests in being so acutely aware of the double life that all of us can see when we start to embark on the dangerous trajectory south, so much so that we arrest the slide instantly, so we don’t do anyone or ourselves any harm.

Here’s a Bible promise from Numbers 32:23: “you may be sure that your sin will find you out.” The fact is, someone is always watching.

Rather than imagine that the sin is ‘over there’, we truly do best as followers of Jesus to learn and apply the lessons Ravi did not.

Not all of us will sin like David or Ravi, but let’s not forget the tenets of the Sermon on the Mount — Jesus reduced the act of adultery to what we do in the eyes of our hearts. Who on earth has never sinned there?

Yes, I know, it’s not the same, but let’s judge from a Jesus viewpoint and not from a human viewpoint. Let’s all do no harm, living at peace with everyone, as far as it depends on us.

NOTE: My thinking here has been informed by David Wood of Acts 17 Apologetics.

Where is the Zeal for My House?

Moral Rot and Its Remedy

In the Waiting “The Hope of the Lord is Our Strength”