The Power of God to Change a Heart

It was the only thing I had ever won. And it was a whopper. I won a trip for two to Hawaii.

We stayed on Oahu in a hotel at Waikiki beach. We rented a convertible and toured the whole island. I’m a WWII buff, so we went to see Pearl Harbor. Before a boat takes you to the Arizona Memorial, they have you listen to a 30-minute film about that fateful day of December 7th, 1941…a date that lives in infamy…the Japanese attack on Pearl Harbor.

After we watched the film, while we were waiting for our boat to take us to the Arizona Memorial, I noticed a frail, 80-year-old man dressed in his full Navy uniform. He appeared to be looking for someone. I went over to him and offered my assistance to help in any way I could. He informed me that he was supposed to meet a local TV station film crew but apparently there was a mix-up and they weren’t there.

I asked him why they were going to interview him and got an answer that shocked me. This 80-year-old man, Joe Morgan, was stationed on the USS Arizona on December 7th, 1941. When the Japanese attacked, he was fifty feet from Arizona on the shore of Ford Island, where the ship was anchored in the middle of the harbor. He was fifty feet away when Arizona exploded and sank. 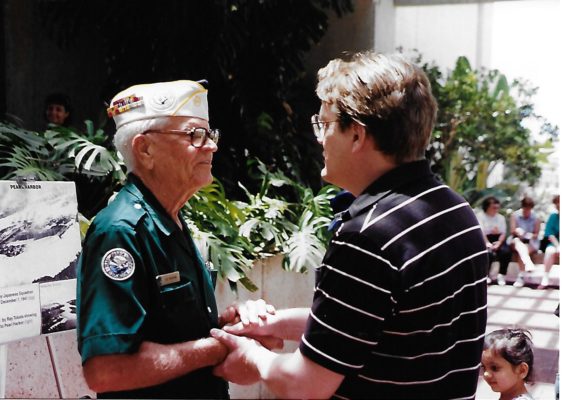 After the war, he left the Navy. He rededicated his life to the Lord and then God lead him back into the Navy as a chaplain. He faithfully served in the south Pacific until retirement in the 1970s. But in the early 1950s, he heard that the Japanese pilot, Mitsuo Fuchida, the one who had led the attack on Pearl Harbor had now become a Christian and was coming to Joe’s base as an evangelist to preach.

Joe was troubled. He knew he should forgive this man but the memory of 1,100 of his shipmates reminded him that this man led the attack that caused their deaths. Joe prayed for forgiveness but felt conflicted towards Mitsuo. The day came. As Mitsuo was being introduced to him, before Joe could do or say anything, Mitsuo spoke. The first words out of his mouth were, “Could you please forgive me for what I did to your friends?”

At that moment, God showed up. Joe realized that just as God had forgiven him of his sins, He had forgiven Mitsuo of his sins also. The man that stood before him was no longer his enemy but his brother-in-the-Lord. In an instant, the feeling of forgiveness washed over him and the two men embraced.

Mitsuo preached that night and when he gave an altar call, several sailors went forward and received Jesus as their Savior. Christ had broken down the barrier that had existed between these two former enemies (Ephesians 2:14,16). Mitsuo went on to evangelize until his death in 1976. Read blog#30 about his conversion.

As Joe finished his story, I realized I was in the presence of a very Godly man. Jesus had arranged our meeting and had blessed me beyond anything I could have imagined on this trip (Ephesians 3:20,21). It has been over 20 years since this happened. I am still blown away by how much God loved me by allowing me to hear Joe’s story.

The rest of our trip was wonderful but nothing can compare to meeting Joe.

Dave earned a Michigan provisional teaching certificate and a Bachelor of Science degree with a major in physics and minors in astronomy, chemistry, and mathematics. He has done graduate work in astrophysics, worked as a physics graduate teaching assistant, and taught college astronomy. His work experience includes a research and development laboratory manager at a plastics company, an automotive engineer, a chemist, and a public and private high school teacher in math, physics, and chemistry. Dave is currently retired from his own advanced materials tooling company. He has taught Christian adult education since the mid-1990s at two churches. He was Director of Adult Education at one church and is now a teacher of Adult Education at his present church. Since becoming a Christ-follower in 1974, Dave has been an avid student of the Bible, with a special emphasis on apologetics. He and his wife, Patti, have been married for over 40 years and have 3 adult sons and 9 wonderful grandchildren.