Buying this little bear wasn’t just for fun. It was a serious covenant between God and me.

My little Rapunzel ran around the German toy store at Disney World. She gazed at all the different toys, but particularly the princess toys were to her liking. She ran to show me everything she wanted—dolls, dresses, stuffed animals, and on and on until we’d looked at every toy roughly 5 million times. I stood next to the display of stuffed animals. Every time we’ve come to Disney over the years, I’ve looked at the German Steiff bears with wonder. Never have I bought one of the handmade, original teddy bears though. Can we say expensive? After examining each little creature with my hands and heart, I was brought back to a little tan, fuzzy bear. Emotions came over me like a flood. This is the one. I couldn’t put him down. As my Rapunzel ran about in joy, breathing in the fairytale of toys, I stood by the display in a daze, unmovable and unable to put the bear back. It felt wrong to leave him.

With open eyes and heart, I had been searching for a “promise present” for a few months. It couldn’t be just anything. It had to speak to me. My heart knew this little bear was the one. The more I looked at him, the more my heart knew this meant I was claiming God’s promise for our family’s future—His promise to grow our family. I looked at the price tag: $38—Ouch—but claiming God’s promise meant sacrifice. 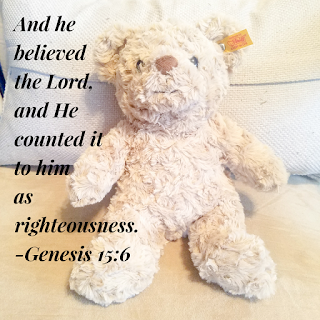 Buying this little bear wasn’t just for fun. It was a serious covenant between God and me. A covenant is a contract, promise, or stipulation between two parties, stating they will both uphold their side of the agreement. In the book of Genesis, God makes a covenant with Abram (Gen. 12-17). God promised to bless Abram and his wife Sarai with a large family and land (Gen. 12:1-9). If you aren’t familiar with the story, Abram and his wife were in their 70s when they received this promise from God. “God told Abram, ‘Look toward heaven, and number the stars, if you are able to number them.’ Then He said to him, ‘So shall your offspring be.’ And he believed the Lord, and He counted it to him as righteousness” (Gen. 15:5-6). Just as Abram, we are in right relationship with the Lord when we trust and believe His promises for our future.

Then God told Abram He was going to bless him, an immigrant, with land—and that’s where Abram pumped the breaks. Give us a child in our old age? Okay, cool, God. I believe you can do that one. Wait, give us all that land over there? Eh, how are you going to pull this one off? God didn’t reply with a typical answer. No, instead, God had Abram perform a bizarre ritual (Gen. 15:7-11). God told Abram to get a heifer, goat, and ram all three years old as well as a turtledove and young pigeon. Then he cut them all in half and laid each half opposite the other. All I see is a massacre of animal halves laid out here. I told you. Bizarre. But, if we were from this period in time, we would know this is an ancient near eastern covenant ceremony. Both parties would walk between the pieces of animal carcasses with the intent that their fate would be as that of the animal if they broke their end of the bargain.

Abram and God do not both walk between the carcasses though. God does not even give Abram a chance.  God puts Abram into a dead sleep and speaks into his future. In the form of fire, God passes between the animals alone. God isn’t placing Abram in a position of making a covenant he can’t keep. God does not allow our failures to determine if His plan happens or not. He is determined to save the world through humanity, despite man’s failure. God shoulders the faith and failures of both parties, which means He also takes on the consequences if the other party fails the covenant.

In the very next chapter of Genesis, we read of how Abram not only lost hope in the promise of territory for his family, but he also lost hope in the one promise Abram did believe. Abram took matters into his own hands. He trusted his wife. He trusted in her anger instead of God in His mercy—by having a son with his wife’s maidservant (Gen. 16:1-16). Abram had failed. We fail every day. We fail to believe God’s promises in our lives. We fail to trust God with our lives. We lose sight of God’s promise, and we try to take matters into our own hands. God bore the consequences of the broken covenant with humanity. Jesus, a descendant of Abram and God’s only son, took on the consequences as the living sacrifice for our failures.

I bought that little grey bear. The most expensive bear I’ll ever buy. Every time my faith wavers in God’s promise to grow our family, I look at my little promise present and remember God’s covenant. Sometimes His answer is no, but with all my being I believe God’s answer in our lives is yes this time. Yes, I will give you more children, maybe not how you think or when you want, but they’re coming. Even greater, every time I look at that bear, I can remember that when I do fail, God’s already covered my brokenness with His grace, love, and promises.

How would your life be changed by claiming God’s promises for yourself?

This is an updated edition of a post originally published on lovethecrazylife.com. Hi! I’m Danielle. I'm a northern girl raising my family in the south. If you catch me, I'll let a Boston style "wicked awesome" slide out. I embrace my awkward, loud self, and don't apologize for being me. As my little girl says, "God made us all unique in our own way." I’m a full-time working, home school mama married to my high school sweet heart. We actually met at a home school group. Yes, we were those kids. We have one beautiful, pink and pony loving daughter. She is the light of our lives. I am a therapist at a psych hospital. I wish I could share all the stories of what happens there with you, but there is this silly thing called HIPPA. Believe me, you name it, I’ve seen it! Coffee is my emotional support drink – it’s been with me through all my storms and every therapy session. But, my Lord is the reason I rise every morning.