Jesus Loves to Feed His People

Jesus is the source, the miracle worker, the supplier, the multiplier. He satisfies our hunger in many different ways, and He gives in abundance.

Years ago, I found myself in a long, hard season of struggle. Between the ages of 18 and 23 years old, I lived in poverty. The word “poverty” might sound like too intense of a word to use, especially if you live here in America, but it is the only word I can think of to remotely describe the situation I was in. I was living in survival mode, really struggling to support myself. At the age of 18, I was kicked out from where I was living, and for about five years, I stayed with different friends and family members, living and sleeping in many different places. I went from sharing a room with someone for a time to having my own room at another place to sleeping on different people’s couches for weeks on end, and sometimes I slept in my car when I finally managed to get one. I jumped from job to job in search of finding one that fit me well. I’ve honestly lost count of how many different jobs I had within those five years.

There is one day in particular I want to share with you. I was working at a car dealership answering phones, and I remember being very hungry. I wasn’t quite sure how I was going to eat that day. Sitting there, I told Jesus about the predicament I was in. Not even two hours later, a man walked up to me, put an egg-McMuffin on the desk in front of me, said “I got you a sandwich”, and walked away. That man didn’t know my situation, but Jesus did.

About two decades after that happened, I went to a conference where, during worship, I had an incredible vision of Jesus walking around to every person that was in the room giving them pieces of bread. I asked the Holy Spirit why Jesus was doing that, and I heard Him say six simple, profound, life-altering words.  He said: “I love to feed my people.” Hearing those words brought me back to that day at the car dealership when the man put an egg-McMuffin on my desk. I was surprised when that miracle took place, but Jesus wasn’t.  He knew what I needed and quickly made sure my needs were met because that is who He is! Jesus loves to feed his people. Let that sink in. I would even argue that He loves to feed us in every possible way. Our souls. Our bodies. Our spirits. 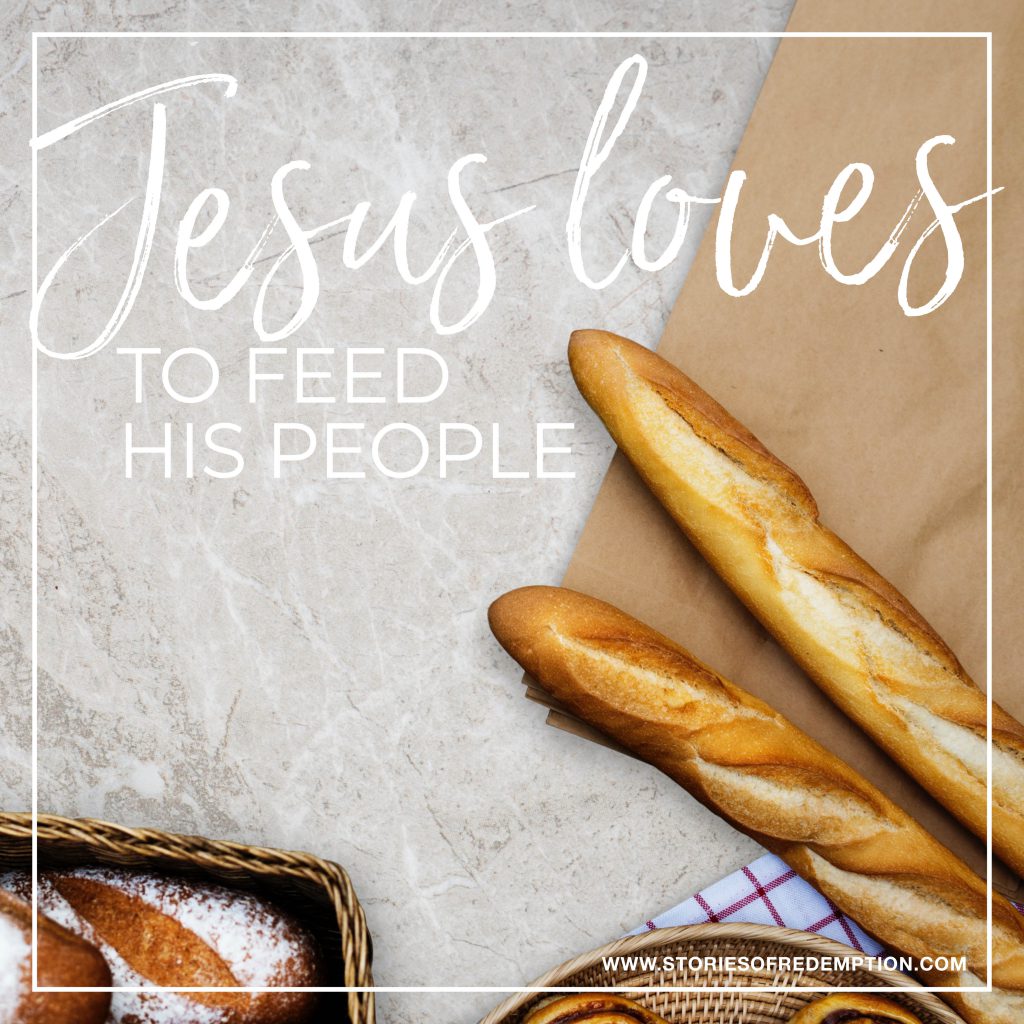 The evidence I have found in the Scriptures that deems this truth is found in the story where Jesus multiplies food to feed the five thousand. This miracle story is the only miracle recorded in all four of the gospels, which tells me that this is an important message that Jesus wants the body of Christ to understand and absorb. In the story, Jesus spent time throughout the day teaching the crowd many things. He fed their souls, their spirits, and even their bodies as they became physically hungry toward the end of the day. This story paints an incredible picture of who Jesus is for us. He’s the source, the miracle worker, the supplier, the multiplier. He satisfies our hunger in many different ways, and He gives in abundance. Everyone in the crowd that day ate as much as they wanted, and there were leftovers. He loves to feed us, and He will always give us more than we need because that is who He is.

Jesus is the Bread of Life. The “Bread of Life” in the Bible has two different meanings. “Logos” is the first primary Greek word for Bread and means “The inspired Scripture of God, the Bible, Jesus, the Living Word.” A great verse that exemplifies Logos is John 1:1. “In the Beginning was the Word, and the Word was with God, and the Word was God” (ESV). I can’t count how many times Jesus has fed me through the reading of His Word, the Bible. Those days I’ve had where I’m in a desperate situation and I happen to open my Bible to a passage that speaks directly to my soul about the battle I’m fighting at the moment—that’s His Logos!

The second primary Greek word for Bread is “Rhema,” which means “an utterance.” Rhema is a portion of Scripture or a verse from the Bible that the Holy Spirit brings to our attention that applies to a current need for guidance or help in a particular situation. It can also be a word or an utterance spoken to us through the Holy Spirit. A great verse that exemplifies Rhema is Matthew 4:4. “Man shall not live by bread alone, but by every word that comes from the mouth of God” (ESV). There have been many times when I have been praying about something, and a phrase, a song, or a word has come to my mind so strongly that pertains to what I’m praying for. Sometimes I have had a dream at night or a vision during a worship service. That’s His Rhema!

I don’t know what kind of bread you need today. Your health might be suffering. You might be going through an especially hard season with one of your kids. You might need a job. Maybe you are spiritually hungry. Whatever it is, I do know the man that is more than able to provide the very thing you need. Talk to Jesus about it. He’s the Bread of Life. He’s the source, the miracle worker, the supplier, the multiplier. He loves to feed His people, and He will always give us more than we need because that is who He is!

Featured and In-Text Image by Rawpixel