How a Life of Miracles Began: Shocked by God’s Extreme Goodness

I was frustrated that I’d heard and read about miracles happening for other people in other places but not where I was and in my life. Why wasn’t it working for me?

As a child and teenager, I had a great hunger to experience God’s power. I believed that God existed because he supernaturally healed my back when I was about nine years old. My mom prayed for me, and I felt something like a hot ball of energy rolling up and down my spine until all the pain left.

I also read and heard amazing testimonies of revival and miracles happening on the mission field. I wanted to experience these things. As I teenager I read 21 chapters of the Bible daily, bought Christian books, and spent time in prayer. I did grow in the Lord and the truth in the Scriptures fed my spirit.

I was very involved in church and also went on mission trips. I learned powerful truths about praise and thanksgiving. However, I was frustrated that I’d heard and read about miracles happening for other people in other places but not where I was and in my life. I felt like I was doing so much to seek the Lord. Why wasn’t it working for me?

By the time I was about 20 years old, I was burnt out. I was disillusioned with the church and frustrated with myself. I felt hurt that I had prayed and fasted and read the Bible so much but God had not done these miracles for me. I felt like a failure because it seemed so hard to share the gospel with people. I tried but never led one person to the Lord. I was usually very timid. I knew God was real and I loved him. Yet my heart was numb with pain and disappointment. I just didn’t understand so many things.

That was when I went to a conference in Harrisburg called “Healing Fusion” with the youth group. I wept during the worship time. I knew God was real, but I felt like he had been stingy with me. Something in me wanted to lift my hands in worship, but I was embarrassed. When I finally lifted my hands, they started tingling. That tingling grew stronger until it became a powerful force like a vibration that I felt on my hands and face. It was as if God’s goodness was so thick around me that I could swim in it. I cried loudly because I had experienced this before but not in a long time. I wanted to touch God again.

The Holy Spirit spoke to me and showed me that He’d always wanted to do these miracles for me. It wasn’t because God didn’t want to do miracles in my life that I wasn’t experiencing them. The problem was that I didn’t understand some important things, and that lack of understanding was hindering me. God spoke to me through these verses:

Psalm 84:11 (NRSV) – For the Lord God is a sun and shield; he bestows favor and honor. No good thing does the Lord withhold from those who walk uprightly.

Romans 8:32 (NRSV) – He who did not withhold his own Son, but gave him up for all of us, will he not with him also give us everything else?

The other thing that happened was that I realized what one of the reasons was that these miracles were not happening in my life. It had seemed obvious to me from reading the Bible that it was usually God’s will to heal. But I had always thought that Paul’s “thorn in the flesh” was a sickness permitted by God. Here at the conference, I became scripturally convinced that sickness was never God’s will for a believer and that the “thorn in the flesh” had nothing to do with sickness.

At the end of one session, the preacher asked everybody who was sick or needed to be healed to stand up. About half the people stood up. The other half was to put their hands on them and simply command them in Jesus’s name to be healed. I found someone close to me and asked him what the problem was. He said, “I have bone cancer.”

Bone cancer! I was a beginner at this! I had never seen anyone healed by my hands before. But I put my hand on his head and began to command that he be healed in Jesus’s name.

I remember exactly where it happened. His back was against the wall, and I had my hand on his forehead. My eyes were wide open. Suddenly, he moved away from the wall just as if a person had walked behind his back and pushed him away. He looked back and forth with a very confused expression on his face and said, “Who just walked behind me?”

When I saw his confused expression, I thought “That must have been the look on my face when God healed me.” When I was nine years old and Jesus healed me, I wasn’t expecting anything to happen. I felt something like a ball rolling up and down inside my back and said: “Mom, what are you doing?” But she replied, “I’m not doing anything. Jesus is healing you.” The man I was praying for looked just as confused as I had been.

My eyes were wide open and I saw that nobody had walked behind him. But I saw him moving away from the wall just as if someone did. He physically felt someone in a hurry push their way behind him, between him and the wall, and say “excuse me.” I knew that nobody had said “excuse me” there, but he heard it audibly. Then I found out that when this being bumped into him, he felt heat go throughout his body.

I got an email from him a few weeks later. All it said was “Thanks for the fire!!!!!!!!!!!!!!!!!!!!!!” There were 22 exclamation marks. It seemed to me that God had sent healing angels and it must have been an angel that pushed his way behind the guy I was praying for. The angel was in a hurry because so many people who needed to be healed within the five minutes we were given to pray for people.

The next thing that happened was that everyone who was feeling heat, electricity, or a similar manifestation of the Holy Spirit was asked to wave one hand. Everyone who was able to do something that was physically impossible for them to do before, or who experienced at least 80% less pain, was to wave both hands. Hundreds of people began waving their hands in the air.

I had never seen anything like this before! A large percentage of the people there were healed of something. I believe it was about 500 people in five or ten minutes. I’m not sure how many people were there in total, but I believe it was about 2,500. Then they began to have a few of the people give testimonies. The testimonies went on and on. Some people there had constant and excruciating pain for more than 10 years and were now 100% pain-free! Many people were moving their bodies in ways that had been impossible after car accidents, and much more happened as well.

When I returned home, I talked constantly about the miracles I saw God do. I began to ask everyone if I could pray for them. For a few weeks, nothing seemed to happen. Yet I didn’t give up. I believed God would take me to the place of being able to have faith for miracles.

Do you know how a person who has had very painful and traumatic experiences may sometimes have flashbacks of the accident or event, causing tears or panic attacks? Well, what I had seen had a similar effect on me but in a positive way. It had shocked me, and I was deeply emotionally affected by what I saw. I had flashbacks of people being healed and suddenly started laughing or weeping.

About two weeks later, at the Wednesday night youth group meeting, I felt my hands and mouth start to vibrate as I was singing. I put my hands on the people there who had injuries or colds, and two or three of them were healed. One guy had a sore throat, and the pain instantly disappeared when I touched him. That was the beginning of a life of miracles.

This is an excerpt from Jonathan’s book The Power and Love Sandwich. To purchase your copy today, click here! 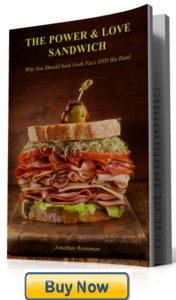 This is an updated edition of an article originally published on gotoheavennow.com

Jonathan Brenneman didn't know if God existed when he was a child. Then one day his mom prayed for his hurting back and he felt something like a ball of energy rolling up and down his spine. The pain was gone! Jonathan is now a missionary living in Brazil. He loves to see God touch people tangibly and heal others, just like he was healed.