The hurricanes throughout our marriage have shown us that we are very capable of bending without breaking as trees do in powerful storms.

October 11, 2018, marked mine and Jay’s 10-year wedding anniversary. We got married in a hurricane ten years ago. Hurricane Norbert. I’ll never forget the name. We were known as “the hurricane couple” at the resort in Cabo, Mexico where we got married. I’ll never forget the days leading up to our wedding. Everything was planned, we were set to go…and then Hurricane Norbert showed up. It was a category four hurricane, expected to make landfall on our wedding day, October 11, 2008. I was a total wreck.

Another factor that wasn’t helping was that the stock market had just taken a major crash a few weeks before our wedding, and we were unsure if we would even have access to the funds we were using to pay for our wedding! I remember frantically calling our pastor, Bill, who was officiating our wedding. What if the hurricane came? What if we couldn’t access our money? What if people couldn’t come that had planned to be there? I was full of so many questions, unknowns, fears, and anxieties. I vividly remember Pastor Bill reacting to my frenzy in such a calm, peaceful, reassuring manner.

He said, “Brandie. You planned this wedding. We are all going; bring your wedding dress. Let’s plan on having the wedding! If it doesn’t pan out, it’s ok! We’ll come back here, get you married here instead, and have one big party. Either way, everything will be fine.” And I felt a deep, calming peace wash over me.

After I got off the phone, I remember Jay saying (like he always does), “Don’t worry, everything will be fine; I have a feeling it’s all going to work out.” The odds were against us, but we prayed and went to Cabo, not knowing what the outcome would be. We knew it would all somehow work out.

And it did! The hurricane turned around and moved back into the ocean. Our wedding day was beautiful and unforgettable. Overcast and cloudy, a little windy but beautiful. There was even a little break in the clouds when we said our “I dos.” A small ray of sunshine appeared. People cheered from the hotel rooms above us. Deep down in my heart at that moment, I felt like God was shining down on us, cheering for us. Despite the circumstances of that day, a beam of hope shined down, and I felt God’s pleasure and joy encircling around us. 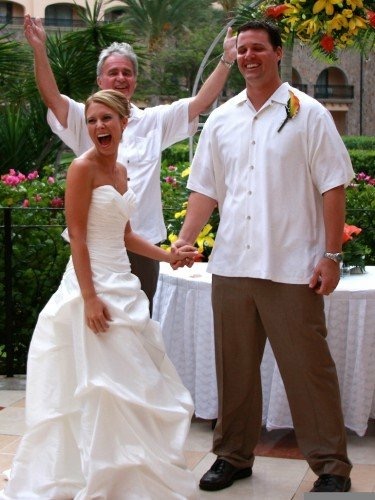 I’m beginning to think that our wedding day began a little theme in the story of our marriage. We have been in many hurricanes. Literally and figuratively. Four different houses, one big move across the country, big job changes, three kids (the births of two children within one year), health scares, postpartum depression, health problems, sicknesses, deaths of loved ones, trips to the ER, time spent in marriage counseling offices, relational conflicts, and the list goes on.

I think we’ve weathered many storms that, sadly, I’m sure many other marriages haven’t survived. The odds have been against us. But in the midst of the many “hurricanes,” I’ve felt many breaks in the clouds and rays of hope and sunshine beating down on us as we continue to say our “I dos.” I’ve also sensed many cheers from our Father in Heaven, loudly celebrating our victories.

Flexibility is “the quality of bending easily without breaking.” The willingness to change or compromise. Durability is “the ability to withstand wear, pressure or damage.” Imperishability. Longevity. Resilience. Strength. Sturdiness. Toughness. Protection is “the action of protecting someone or something or the state of being protected.” Defense. Security. Safekeeping. Sanctuary. Care. Umbrella. Shield.

I would say that marriage has taught us both the art of how to be flexible and durable and also how to protect one another. The hurricanes throughout our marriage have shown us that we are very capable of bending without breaking as trees do in powerful storms. We’ve learned that we are quite able to withstand the wear, pressure, and damage that life has thrown at us.

We have learned that it is our job to protect, care for, and shield one another through the wear and tear of the outside world. I know Jay has undoubtedly been those things for me. He’s been my rock, my shield, my sanctuary, my umbrella and so much more. No matter what happens, he always says, “Don’t worry, everything will be fine; I have a feeling it’s all going to work out.” His faith, his perspective, and his outlook on life during the most adverse of times have been a huge testament to me. He always seems to say these things with a smile, too.

Recently, I had a health scare. I had gone in for a mammogram, and they wanted me to go back for more testing. We went out to dinner the night before, and we were talking about all the “what ifs.” One big “what if” of mine was “what if I die?!” You know what he said to me in response when I told him that? He said, “Is that what you’re using as your measuring stick? Death? Do you think Jesus used death as His measuring stick?” I hardly knew what to say. He was right. If I’m using death as my measuring stick of what I’m most afraid of, then it might be a good idea to go re-think the convictions I have in regard to my faith. It has been astounding to watch his faith grow throughout the years as well as mine. He has been a good leader in that.

Ironically enough, I was literally sitting in a hurricane while I wrote this on our 10-year anniversary date. October 11, 2018. Hurricane Michael. It’s funny because Jay’s middle name is Michael! There’s no one else that I would rather “do life” with other than my Jason Michael. He is the one I would choose over and over again. He’s the dad to my kids that I always wanted but never had. He has more patience than anyone I think I’ve ever met. There’s a deep well of kindness and joy that sits inside of him and constantly spills out. He almost always walks around with a smile and a sparkle in his eyes.

It’s rare that he has a “bad day” because he has such an optimistic attitude. Anyone that knows him knows that he is entertaining to be around, could be a standup comedian (I had to add that in out of pure love. I know he would want me to write that. That’s not to say I don’t think he’s funny), he’s a low-key, low-stress, fun-loving kind of guy. The connection that Jay has with our family is incredible. He always puts us first. My love for him has grown to a deep place over the years, and I thank God that He put us together. God sure knew what He was doing when He gave him to me. He is such a gift. Happy 10-year anniversary, babe!